Stay in the loop with Dr. Maddy and everything going on at Performance Chiropractic Clinic. 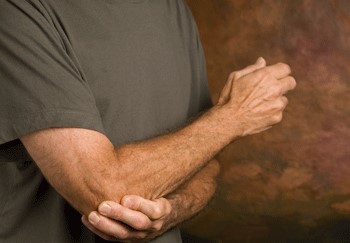 Below is a case study that demonstrates how chiropractic care provided significant pain relief for a basketball player with an elbow injury.

The case study, published in the Journal of the Canadian Chiropractic Association, involved a 41-year old man who had fallen on his left elbow during a game of basketball five weeks prior. The man reported moderate elbow pain, and could not play basketball or perform other activities involving his left elbow without experiencing pain. After a physical examination, it was discovered that not only did the patient show signs of tendon injury in the elbow, he also had dysfunctional segments in the mid-back (thoracic spine), along with a forward shoulder posturing.

The patient was treated with multimodal chiropractic care which included high-velocity, low-amplitude spinal manipulation of the thoracic spine, as well as acupuncture and Active Release Technique applied to the elbow. Active Release Technique is a specific soft tissue therapy in which the practitioner applies deep tension to an area of tenderness as the patient actively moves the tissue through specific movements in order to release fibrous adhesions. The patient was also prescribed home exercises following the Brugger’s exercise protocol to address postural dysfunction.

One week after receiving his first session of the multimodal chiropractic care, the patient reported a near resolution of symptoms. His pain had dropped from a 5 out of 10 to a 1 out of 10, and he said he felt he could engage in his regular recreational activities with only minimal pain. His relief remained constant at the six-month follow-up. No adverse events were reported.

“A combination of acupuncture, ART® and spinal manipulation seemed to have been effective at resolving the patient’s complaints and allowing him to return to normal activities,” the researchers concluded. They wrote that theirs is the first study to observe the effects of such a combined treatment on elbow tendinopathy.

Although this study specifically examined the effects of chiropractic for an acute elbow tendon injury, chiropractic care can also help with chronic elbow pain caused by repetitive motions, like tennis elbow.

Dr. Maddy has helped athletes of all kinds recover from things like elbow pain and more while helping them improve their sports performance through regular chiropractic care. Book your appointment with Dr. Maddy today at the link below, or contact us with any questions you have!